What Does It Take To Make Chocolate

by Violet Beauregarde | Feb 2, 2018 | Everything You Could Want to Know About Making Chocolate

Chocolate has been around for many years. This was first used by the Native American civilizations as a refreshment but soon, this was developed into chocolate bars which we all eat today. But what does it take to make chocolate? Here are few things to give you the idea.

First, chocolate is produced from cocoa beans that from the Theobroma cacao tree. In English, this term means “food for the Gods” because of its heavenly taste that the Aztec and Mayan civilizations have enjoyed for years. 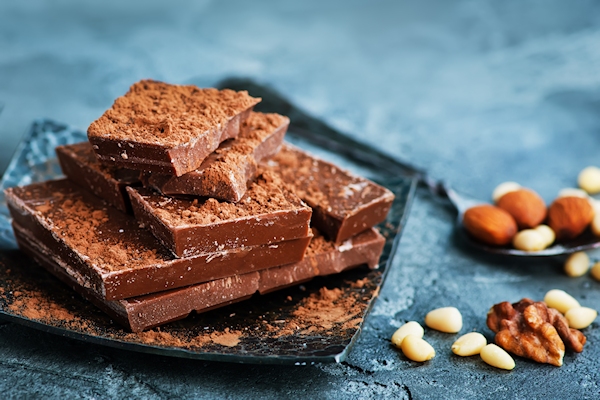 These degrees are harvested mainly from the Ghana and the Ivory Coast with some getting their supplies from other countries in South Africa and South America.

The reason why chocolate is abundant is because the pods from these trees are produced all year long. There are three types that each have their own distinctive flavor namely Forastero, Criollo and Trinitario.

Of the three, the most abundant among them is Forastero. Criollo on the other hand is very rare while Trinitario is a hybrid of the two.

Harvesting the pods is usually done by hand with machetes. The farmers have to split open the pods to get to the cocoa beans. Afterwards, they scrape the pulp and beans from inside the pods and left to ferment in baskets from 2 to 8 days.

Fermentation is important because without it, the beans inside would be too bitter to enjoy. After this process, the contents are spread in a single layer to dry usually under direct sunlight before this is packed and shipped to the buyer.

Now you understand what farmers do, it is time to explain what the manufacturers do. Once the beans reach the factory, this is roasted and then transferred to a winnower. This machine removes the shell of the bean and leaves the “nibs” which is what is used to making chocolate. This is then grounded and turned into a rich thick paste now called chocolate liquor.

The liquor then undergoes one more process to remove the cocoa butter which has an end product known as “cocoa presscake” or cocoa powder and here, manufacturers decide what kind of chocolate to make.

The conching is considered to be the last step in screening the chocolate in order to get its ultimate flavor and texture. The speed, temperature and length of this process has a lot to do with the taste of the chocolate. Also, this helps remove any acidic tones.

This is then tempered into a large machine which pours the chocolate into the mold. Once it is frozen, the bars are then packed and ready to be shipped off to the consumer.

Now that you know what it takes to make chocolate, you can begin to appreciate what you buy whenever you go to the grocery store and buy a few of these as a snack. Some of these are cheap while others are expensive and it all boils down to what kind of cocoa tree was used to make the finished product.

This website uses cookies to improve your experience while you navigate through the website. Out of these, the cookies that are categorized as necessary are stored on your browser as they are essential for the working of basic functionalities of the website. We also use third-party cookies that help us analyze and understand how you use this website. These cookies will be stored in your browser only with your consent. You also have the option to opt-out of these cookies. But opting out of some of these cookies may affect your browsing experience.
Necessary Always Enabled

Any cookies that may not be particularly necessary for the website to function and is used specifically to collect user personal data via analytics, ads, other embedded contents are termed as non-necessary cookies. It is mandatory to procure user consent prior to running these cookies on your website.